Yes the Teenage Mutant Nunja Turtles are back!

Nickelodeon’s all new, CGI-animated hit series debuts on DVD with Teenage Mutant Ninja Turtles: Rise of the Turtles.  Join these four ninja brothers-Leonardo, Raphael, Donatello, and Michelangelo in this action-packed adventure as they emerge from their hidden lair in the sewers of New York City for the very first time. In addition, enjoy six awesome “making of animatics” and a karaoke music video to the show’s tubular theme song. And as an added bonus, each DVD will include an exclusive Teenage Mutant Ninja Turtles poster for a limited time only. Created by Nickelodeon Home Entertainment and distributed by Paramount Home Media Distribution, Teenage Mutant Ninja Turtles: Rise of the Turtles is available on DVD starting this week for the retail price of $14.99. 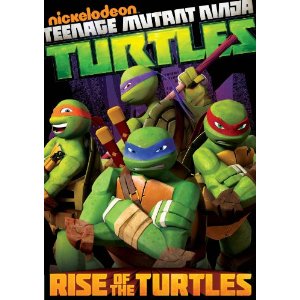 Teenage Mutant Ninja Turtles: Rise of the Turtles will bring you back to the day seeing the turtles in action!  It is so fun to see my kids get into the Ninja Turtles now, which was one of the most popular kids’ television programs of the 1980’s. I highly recommend purchasing this DVD today!

*I received this product from Nickelodeon for review purposes. All opinions are my own and not swayed by outside sources.