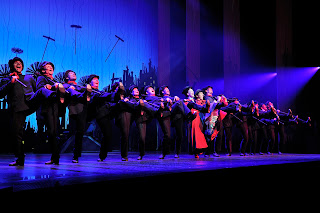 Do these songs ring a bell??  Of course, they do because they are from the hit movie, Mary Poppins. Well, I have great news for anyone that lives in the New England area. The touring group of the Broadway #1 hit musical is coming to the Providence Performing Arts Center. You will not want to miss out on this Broadway show that had NYC buzzing with delight! The following are the show dates and times that you can see Mary Poppins, the Broadway Musical, at the PPAC:
February 8, 2012: 7:00 PM
February 9, 2012: 7:30 PM
February 10: 7:30 PM
February 11: 2:00 PM
February 12: 1:00 PM, 6:30 PM
February 14: 7:00 PM
February 15: 7:00 PM (Amica’s Family Night)
February 16: 2:00 PM, 7:30 PM
February 17: 7:30 PM (Family Night Pricing-Just added *)
February 18: 2:00 PM, 8:00 PM
February 19: 1 PM, 6:30 PM
*If you purchase tickets for the February 17 family night, you will be able to buy one regular priced ticket and receive a kid’s ticket of equal value for FREE. This offer is available for select seating.
With four productions currently running on three continents, Mary Poppins is one of the biggest stage musical success to emerge from London or New York City in recent years. Worldwide to date the show has grossed over $644 million and welcomed in 9.3 million guests. Mary Poppins is the winner of 44 major theatre awards around the country including the Tony Awards. It was up for the  Best Musical nomination at the Tonys and won for best scene design. The Broadway tour of Mary Poppins began on March 2009 and has played in over 30 cities to date. And guess what, our very own PPAC is hosting as the next major city location!
MARY POPPINS is bringing its own brand of Broadway magic to theaters across the country, which has Variety raving, “This is the rare touring production that over-delivers on every level!” Featuring the irresistible story and unforgettable songs from one of the most popular Disney films of all time, plus brand-new breathtaking dance numbers and spectacular stage-craft,MARY POPPINS is everything you could ever want in a hit Broadway show! So get swept up in the fun of this high-flying musical the New York Post gives 4 out of 4 stars and calls “a perfect piece of musical theater.”  –PPAC.org
We took Hayley to her first Broadway musical last month to see Shrek at the PPAC. She was completely estatic the entire time and she has never even  watched Shrek before. I am really looking forward to her seeing one of her favorite movies, Mary Poppins, come alive right before her eyes.  I am pretty sure we are going to be owning the CD when we leave the theatre. It is after all, a classic!
To buy tickets to any of the shows listed above, please contact PPAC or call the PPAC box office at 401-421-ARTS. You will not want to miss out on this wonderful show!
Giveaway:  One winner will receive a four pack to see Mary Poppins, the Broadway musical for  the Wednesday February 8 show at 7 pm. This giveaway is run via rafflecopter. For those unfamiliar with rafflecopter, enter your name and email to start. It will then give you the mandatory entry which is to comment on who you would bring to the show. Please leave this comment in the comment section proceeding the post. After you do the mandatory entry which is to comment, you can continue on to earn additional entries. The more entries you fill out, the more chances you will have to win! Click “read more” to see the rafflecopter and GOOD LUCK!!